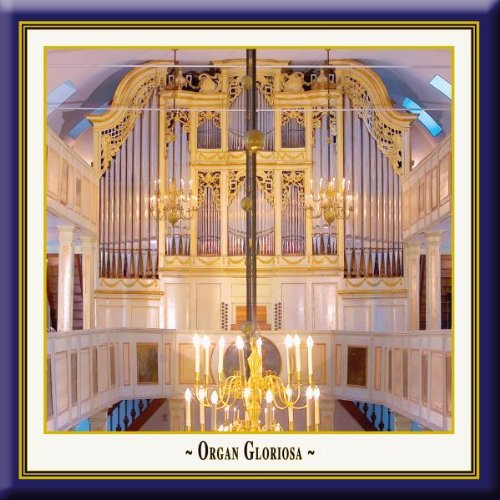 "Organ Gloriosa, a concert in honour of the Prince of Homburg - our first production involving the Great Buergy Organ in the Bad Homburg Castle Church is dedicated to him. During the recordings, the sound of the organ penetrated into the depths of the Landgrave family crypt, thus transforming the famous Prince along with his ancestors and descendants into an illustrious audience for this recital. May their goodwill go with this series of concerts and recording productions. Just imagine - a church full of shadows, a hard pew, gazing at the altar out there in front, waiting for the sound of the organ to come from far away, from heaven ... The popular way of listening to an organ concert. Yet I ask myself - what about the masters of an instrument like this? Composers like Bach and Mendelssohn - what were their feelings? What was the decisive factor that triggered their magnificent and profound compositions? Have you ever sat at a church organ? Staring at the manuals, in front of you the keys and the stops - and, stretching away behind you, the noble nave and transept of the church. Then, looking upwards, you see the mighty bass pipes that seem to tower over you, reaching up and up before losing themselves in the half-light of the vaulted ceiling... And now, the first hesitant touch of the keyboard, a resonant booming that uplifts the soul - and you immerse yourself in the sound of the organ, which has indeed rightly been christened the "Magic Horn of God". This is the approach we are taking with this presentation of the Buergy Organ. coming to you from the Bad Homburg Castle Church and featuring our virtuoso, Ulrike Northoff. We want to bring home to you the wonderful and powerful tones of this instrument - exactly as it sounded in the days of the old masters, when they sat at the keyboard of an organ and devised these compositions in honour of the Creator." (Josef-Stefan Kindler, Publisher)

The Great Buergy Organ of 1787 in Bad Homburg Castle Church dates back to those eventful times at the end of the 18th century. At that time, there lived in the little town of Homburg, seat of the Landgraves, a superb organ maker from Switzerland by the name of Johann Conrad Buergy (1721 - 1792). He received a commission from the Protestant-Lutheran Church Convent to build what was to be his greatest masterpiece. With 38 stops distributed over three manuals and pedals, this organ is a magnificent example of Central German organ building in the style documented as being preferred by Johann Sebastian Bach because of its distinctive sound. The effulgence of the organ takes on something of the Northern German tradition without neglecting the tonic keynotes found in Southern German organ building. With its many registers, the organ offers a wide variety of wonderfully different sounds, ranging from exquisite solo voices of remarkable colour to a majestic tutti with striking bass tones. It is therefore equally suited to interpreting Baroque or Pre-Baroque works, classical compositions or selected pieces from the Romantic era, or indeed, even modern music. An unusual feature of the organ is its echo chamber: the wind chests and the pipes of this section of the instrument are hidden in the lower part of the organ housing, so that the tones are not directed straight into the church, but diverted though various byways, thus sounding remote and almost echo-like - an effect very popular in Baroque music, which was later continued with the remote consoles of Romantic organs. The impressive sound is accompanied by opulent visuals: the artistic back-drop of pipes, which fills the entire rear space above the first gallery right up to under the church ceiling, forms a striking counterpart to the choir section facing it, framed by two rows of windows. These bathe the interior of the church in a warm glow of light that was nearly lost in the course of the changing history of the castle. For, with the dwindling influence of the Landgraves, the organ rapidly fell into disrepair. After only 90 years, its use was discontinued and it was later dismantled. All that remained were the housing and the bellows and - for a short time - the tin flue pipes, until these were melted down during the 1st World War. However, 200 years after its commemoration, two lucky coincidences made it possible to restore the organ to its original glory: Johann Conrad Buergy had a journeyman by the name of Johann Georg Foerster, who was to become one of the founders of Foerster amp; Nicolaus, the world-renowned and respected Hesse firm of organ builders. Buergy's knowledge of the art of organ making has been handed down in this company until today. In the 1980s, the devoted citizens of Bad Homburg who were members of the Board of Trustees of the Bad Homburg Castle Church succeeded in having not just the church building restored to its original splendour, but the Great Buergy Organ of 1789 as well. And what could have been more natural than to entrust this demanding task to Foerster amp; Nicolaus, who duly completed it in 1989? Today you can admire the organ in all its glory - as one of the few remaining testimonies to the style of organ building in the classical era. Its distinctive sound and remarkably broad range have been captured fully on this CD for the very first time.

"h3"About the Artist "p"Ulrike Northoff, the internationally active concert organist, received her training at the School for Church Music in Esslingen near Stuttgart. After being awarded her diploma in church music, she continued her music education by specialising in organ studies at the Heidelberg School for Church Music. At the same time, she was actively participating in numerous master classes held by prominent organists (Prof. Bossert, Prof. Radulescu, Prof. Ruebsam). Since then, she has taken up an active concert career, performing on historical and modern organs in major churches all over Europe. She has given solo recitals in places such as the Marien-Cathedral in Riga, where she performed on the biggest Romantic organ in the world - the famous Walcker Organ. She has also played several times in Meissen Cathedral, one of the most important historical monuments in Germany. She is a regular guest at celebrated international organ festivals in, for example, the Polish city of Krakow or at Brno in the Czech Republic and Vilnius in Lithuania. Ulrike Northoff has given organ recitals in famous churches in Basel, Copenhagen and St. Petersburg as well as at important concert venues in Germany, including the Solitude Palace outside Stuttgart, the Stiftskirche in Tuebingen and several times at the Hoechster Orgelsommer festival in Frankfurt. Reviewers stress her "palpable joy in playing" (Frankfurter Allgemeine Zeitung). She brings a "rare freshness and vibrancy to the organ" (Stuttgarter Nachrichten). In addition to her solo concerts, Ulrike Northoff regularly appears in "Organ Plus" programmes with musicians from the Hesse Radio Orchestra as well as with other soloists from Germany and elsewhere, winning acclaim for her "delicate and adaptable accompaniment" (Frankfurter Rundschau). After several years as full-time cantor and music director in Bad Homburg, in 2001 Ulrike Northoff became the artistic director of the concert series "Musik im Schloss" ("Music in the Castle"). Since 2006, as part of this series, she started the international Bad Homburg festival, "Orgelsommer im Schloss" ("Summer with the Organ in the Castle").

We’re celebrating with a special Better Sharing campaign, honoring 20 years of commitment to open access and better sharing. We invite you to join us. Our goal is to raise $15 million in support.

Registration for the Virtual 2021 CC Global Summit Is Now Open

Exciting news! Registration for the virtual 2021 CC Global Summit is now open!  It’s a special year because Creative Commons is turning 20! The 2021 CC Global Summit is shaping up to be one of our biggest, boldest events yet, so join us 20-24 September for a week of discussion, collaboration, creativity and community building. … END_OF_DOCUMENT_TOKEN_TO_BE_REPLACED

Reflections from my first year as Creative Commons’ CEO

2 billion works and counting. Explore these featured Creative Commons Licensed resources below — from literary works, to videos, photos, audio, open education, scientific research and more! Or you can share your work, and help light up the global commons!